The Elios2 drone has recently been used to inspect tanks used by a large European pharmaceutical company and has created considerable savings and benefits for them in the process.

Large stainless steel tanks are used by the pharmaceutical industry for product manufacture. When a pharmaceutical company receives a new tank or when a new cleaning process is implemented for a tank, health and safety protocols are very strict in ensuring that the tanks are completely free of any contaminants. 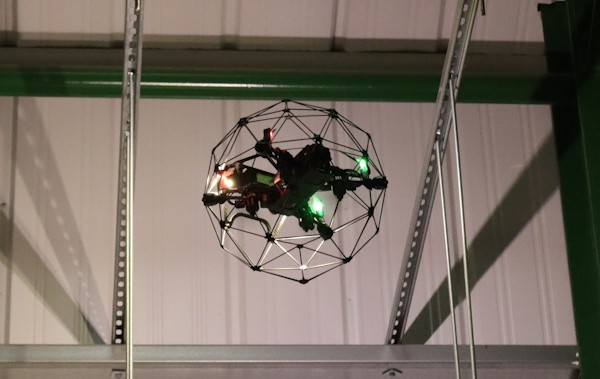 To that end, Riboflavin (a yellow-coloured vitamin) is sprayed on the inside of the tank. Riboflavin is used as a substitute for contaminants to test that cleaning process is working as effectively as it should. If Riboflavin remains after the first round of cleaning, then the cleaning process must be adapted. Riboflavin must then be re-applied and re-cleaned until the tank is Riboflavin-free.

The mostly costly element in the safety protocol is the human inspection, by cleaners, of the stainless steel tanks.

There are two inspections. The first inspection is to ensure full coverage of Riboflavin in the tank, and the second is after it has been cleaned off to ensure none of it remains. The inspections are time consuming, costly and carry and element of danger for the inspectors.

The pharmaceutical company wanted to explore whether drone use could speed up the Riboflavin tests, reduce downtime and increase savings.

The Elios2 drone, designed to fly in confined spaces, delivered on all the success criteria for the company.

The results? It replaced manned entry into the vessel with drone entry, and the number of inspectors needed was reduced from five to three using the Elios2.

60,000 Euro were saved from reduced downtime in just one round of tank inspections, which included five tanks in the pharmaceutical plant.

The Elios 2 significantly improved safety by removing the need for inspectors to physically enter the tanks.

The pharmaceutical company is interested in using the Elios2 more often in its tank cleaning and inspection protocol.

This is yet another example of how the increasing use of drones for inspection in commercial and industrial settings is having a hugely positive impact on previously time consuming and labour-intensive processes.

At Networx3UAV we have used our Elios2 in a number of internal inspection scenarios, and would be happy to discuss any requirement you had.

<< BACK TO BLOG HOME
Want to know more about our services and how we can help you?

To arrange a demonstration of our van/drones, please send us the following details: